Ten Commandments in the Bible Verses 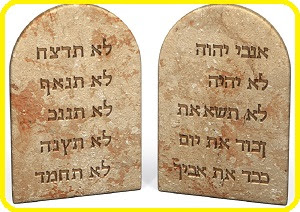 Let's talk about the ten commandments of God according to the Bible, which is written in the old covenant that God commanded for the people of Israel. God saw that the Israelite did not do well so he made this commandment so that they could see what was right and wrong.

This God's command was still in effect by God to the Israelite, but none of them fulfilled it before God. We read the Ten Commandments bible verses in Exodus 20:1-17 and Deuteronomy 5:6-21.

Ten Commandments in the Bible

1. I am the Lord your God. Do not worship false gods.

2. You shall not take the name of the Lord your God in vain.

3. Obey the day of the Sabbath.

4. Respect your father and your mothers.

6. Do not commit adultery.

8. Do not make accusations and do not lie.

9. Do not covet what is not yours.

10. Do not covet your neighbor's spouse.

It is God's 10 commandments summary that he gave for the people of Israel. No other generation was called God's people in ancient times but only Israel's people. But when it comes to Christ, all who believe in him are called God's people, so there is no difference between the Jews and the Gentiles, but Christians follow Christ's command, that's why they are called "Christians". If you have a commentary, please give it a try below. God bless us!

Note: Bad word is prohibited and will be possible to delete!